This lab will help you get started with the second phase of the project: Interactivity. Hopefully you’ve made significant progress on world generation by the time you’re doing this lab. You are not expected to be done with phase 1 at the time you’re working on this lab, but you should (hopefully) be close.

As with lab 12, this lab will not contribute any actual code directly to your project, it will help you get more familiar with useful tools necessary for the project and teach you some programming paradigms you might end up using.

In preparation for making your game, we will use StdDraw and java.util.Random to construct a simple memory game. This game is much like the electronic toy Simon, but on a computer and with a keyboard instead of with 4 colored buttons. The goal of the game will be to type in a randomly generated target string of characters after it is briefly displayed on the screen one letter at a time. The target string starts off as a single letter, but for each successful string entered, the game gets harder by making the target string longer.

Eventually we want MemoryGame.java to have a main method which will launch a playable memory game, but instead of jumping straight into the implementation of the game, it is good to try and break down what tasks you will need to perform in order to run a game. For this memory game it would looks something like:

In general, good coding practice is to first build small procedures with explicit purposes and then compose more complex methods using the basic ones. Eventually, you’ll be able to build up something as complicated as a game or text editor using just a few lines in your main method. If you take a look at MemoryGame.java you will see that we have written in a few method headers which will each handle one of the above tasks. This process of identifying the steps of your game and breaking it apart into individual methods is highly recommended for project 3. It will give you a clear path forward in development and also provide clear breaks for unit tests.

First task: we need to be able to randomly generate a string of a specified length. Briefly mentioned above, this random generation should be done using java.util.Random.

Modify the main method and the MemoryGame constructor to create a Random object which uses the first program argument as the seed. After that, complete generateRandomString so that it produces a random string using your Random object that is the length specified by the input n. Since we only want to produce strings of lowercase characters, the private CHARACTERS field has been provided for your convenience.

Now that we have a random string, we need to be able to display this string on the screen one letter at a time. To do this, we will use the StdDraw library which you used in Project 0. Unlike in Lab 12, you will be using StdDraw directly, rather than relying on a tile engine. We use the StdDraw library because it is rather light and easy to get started with, but there are a few quirks of the library you should be aware of while working with it. Notably, when we want to change what is displayed on the screen, we have to clear the entire screen and redraw everything we want to show up. Because of this, it is incredibly useful to have a method which first clears the canvas, draws everything necessary for the next frame, and then shows the canvas.

Eventually, drawFrame will be this method for us, but for now let’s keep it simple. We know we need to display strings on the screen and they should be noticeable. Fill out drawFrame so that it clears the canvas, sets the font to be large and bold (size 30 is appropriate), draws the input string so that it is centered on the canvas, and then shows the canvas on the screen. This would be a good time to look at the StdDraw API and figure out exactly how it works. Some useful methods to look at include:

After displaying the target string one character at a time, we need to wait for the player to type in their string. For this task, we will have to use StdDraw’s key listening API to read in what the player typed. The methods of interest in this lab are hasNextKeyTyped and nextKeyTyped. They interact with a queue StdDraw uses to store all the keys the user has pressed and released. hasNextKeyTyped looks to see if there is any keystroke left in the queue while nextKeyTyped removes the key at the front of the queue and returns it. Note that nextKeyTyped returns the key as a char - this is another quirk of StdDraw and prevents us from using any keys on the keyboard which do not correspond to a char value.

Once you’ve familiarized yourself with how StdDraw handles inputs from the keyboard, write solicitNCharsInput which reads n keystrokes using StdDraw and returns the string corresponding to those keystrokes. Also, the string built up so far should appear centered on the screen as keys are being typed by the user so that they can see what they’ve hit so far.

A nice feature to add would be the ability to delete characters in case of a mistake, but since StdDraw can’t handle the backspace key we’ll just ignore this feature and say its for the sake of making the game harder.

We’re almost there! Now that we have defined all of our subprocesses, it is time to put them together and run our game. The startGame method should launch our game and begin the loop of gameplay until the player fails to type in the target string. The code for startGame should look like a translation of the following process into code:

After you’ve done this you should be able to run MemoryGame.java and play your game! It’s pretty bare bones and definitely not pretty, but we’ll fix that a little bit in the next section.

At this point, you have a functional game which someone could play, but it is definitely not presented in the most pleasant way. Most importantly, if someone picked up the game with no context whatsoever it would be a bit hard to figure out what was going on. Since the game is pretty simple, we could fix this with a single message at the top which told the player what to do, either “Watch!” or “Type!”. While we’re at it, a good thing to display as well would be the current round number, so they know how long the target string is, and, since we’re nice people, an encouraging phrase for the player would be great too. Eventually, we want something that looks like: 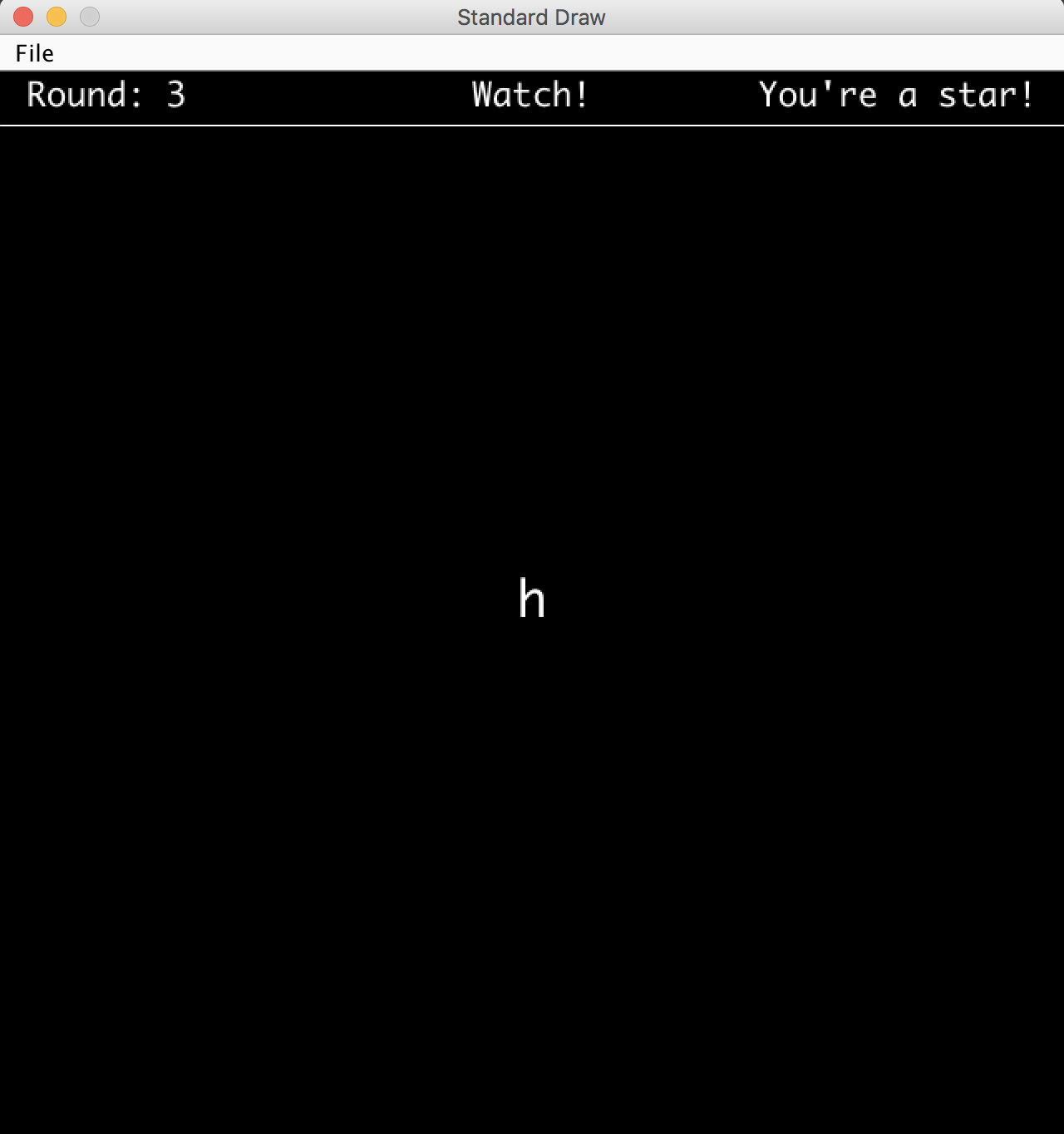 Since this is a change to the user interface (UI), it means we need to modify drawFrame to have this feature. Add to the method drawFrame so that as long as the game is not over, a bar is drawn at the top of the screen with: the round number displayed on the left as “Round: “ + round number, the current task displayed in the center (“Watch!” or “Type!”), and an encouraging phrase on the right. For the encouraging phrase, you should randomly choose one to be displayed from some collection of nice phrases. For your convenience we have provided the private ENCOURAGEMENT field with some phrases, but feel free to add your own.